I was asked to review Yoko Kawaguchi's new book Japanese Zen Gardens (Frances Lincoln) by Anne Wareham at Thinkingardens.  Here's what I had to say. Picture of Ryoan-ji by Alex Ramsay taken from the Telegraph 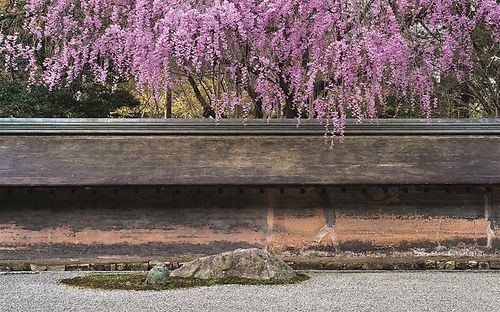 New books on Japanese gardens fill me with anticipation, a mixture of excitement and dread – I can’t resist buying them, but there’s always the worry, as with all books I suppose, that they might not offer anything new, merely regurgitating the same old information within a fresh package. I buy them nevertheless, in the hope of coming across some juicy bit of new information – a garden I’ve never seen before, or a fresh look at familiar images. So, it was with trepidation that I tore open my cardboard mailing pouch to reveal Japanese Zen Gardens by Yoko Kawaguchi. It’s a whopper. It’s also, I’m pleased to say, a corker. Yoko is, as you can guess, Japanese, which gives her a head start in this sort of thing, but she’s well travelled and has lived in the UK since 1989, so her writing seems nice and natural.

The photography by Alex Ramsay is spectacular. He’s stayed away from too many close-ups and details, and concentrated instead on the gardens themselves, and the results look very ‘Japanese’ to me. I mentioned this to Alex, and he confirmed that Yoko had been instrumental in helping him to visually approach the gardens as they are meant to be seen, looking out for key focal points and angles, and he obviously made several trips out to Japan, as the seasons are nicely covered too.

Along with the foreword and introduction, there’s a fascinating timeline at the beginning of the book, putting the history of Japanese Zen into perspective – amazingly, we were signing the Magna Carta while they were building their first Zen temples (although Europe had caught up a bit by the 14th century with the creation of the gardens of Alhambra.)

The first half of the book takes us through 800 years or so of gardens, right up to the 20th century designs of Shigemori and Nakane. After that, the common symbols and motifs are introduced, and this is where, in places, it gets a bit too in-depth for me: distinguishing between the classic three-stone sanzon-seki arrangements and the less common Kannon and Fudo double stones, for example. When I found myself losing interest, I recalled the story I’d heard about the Buddhist monk who’d been caught with naughty magazines. Asked why he had them, he answered, quite honestly, that he just enjoyed looking at the pictures. Alex Ramsay’s photography really is a delight!

My main concern with any book about Japanese gardens is the misuse of the word Zen. Crucially, right from the start, Yoko does the right thing and gets straight to the point: a Zen garden is a garden within a Zen temple – it is not a style of gardening per se. So although Ryoan-ji, featured in the book, is for most of us the epitome of a zen garden, with it’s minimal look of rocks and raked gravel, loaded with myth and symbolism, the Japanese don’t actually call it a zen garden at all – to them it’s a karesansui garden (dry landscape garden). Yoko acknowledges this, and turning the pages of her book reveals other garden styles within Zen temples, all just as valid. Shoji Yamada’s fascinating book Shots in the Dark raises the point that it was only in the mid-20th centruy that the term Zen garden was coined, by an American, to try and define gardens like the one at Ryoan-ji. It’s done wonders for the tourist industry.

Scattered throughout the book, nicely placed to change the tone, are Gardens of Distinction – a closer look at individual gardens. Places such as Keishun-in in the Myoshin-ji complex in Kyoto get the full treatment, which is a real pleasure as it’s not often featured in books to this level, and it will challenge the preconception of what a Zen garden is – as well as getting readers reaching for their copy of Hillier Trees and Shrubs to try and decipher some of the plants before them.

My one beef with the book though, although it’s minor, and very personal, is that, like just about every book on Japanese gardens, there’s very little on gardening. It’s all history, culture, symbolism and meaning. There are just four short pages of text on plants focussing mainly on maples, cherries and azaleas, with a nod towards the evergreens, but that’s about it. One or two photo captions mention plant names, but in general, there’s very little to guide readers. One instance when plants are mentioned is in a photograph of Ryogen-in, where a Japanese holly, Ilex rotunda, dominates the corner of the courtyard. I’d have liked more of this, to add an extra element to the book. What about the Ilex integra pictured, but not mentioned, in the photograph of Kodai-ji?

That aside, it’s a beautiful book and would make a great addition to any collection, as well as a stand alone introduction to temple gardens. Although by the nature of its title it excludes certain garden styles (notably castle and palace gardens) it would make a fine study guide to anyone visiting Japan, and there’s a useful bit at the back with visitor information for all the gardens mentioned. I’m certainly heading for Jiko-in, in Nara, on my next trip.