Our showroom is open and we are dispatching orders as usual!

Where it all began

This is Futoshi Yoshioka, or Yoshioka Futoshi, depending on how Japanese you are. His family business, Asuka Noen, was one of the places I worked and trained during my time in Japan, and it's people like him who inspired my obsession with pruning. You can probably see why - this is one of many small nursery fields of trees (hatake) they own, scattered around the town of Asuka, in Nara Prefecture. It's full of Podocarpus macrophyllus, known as maki, in various states of completion. 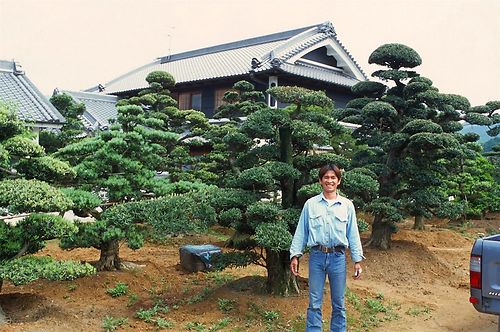 This one picture alone gives a fascinating insight into Japanese nursery/tree production.

They're field grown, not pot grown, and 'heeled in' rather than fully planted - this provides drainage against summer rains, and makes moving them for sale easier, as well as protecting them during the inevitable autumn typhoons (better to simply blow over than to be wrenched out of the ground).

If you look closely at the tree immediately behind Futoshi, you'll see a) how fat the trunk is for a tree that height, and b) that the top has been choped off. This creates a sense of maturity and scale that you wouldn't normally find in a 10' tree. This tree would have started its life 'in the wild' and a nursery would have had the harvesting rights to remove a certain number like it (and replace them with young trees). They'd be dug out of the ground, chopped in half then allowed to recuperate for a while  - many years - before being re-trained into their new shape. Futoshi's family buy them in this re-trained shape, and sell them on locally. They might stay on their nursey for a few years, or could be sold within days of arriving. I was particularly pleased because a tree like this was bought by a designer the same day I had clipped it (of course it was the shape, not my clipping that sold it, but still...)

There are two questions everyone asks when they see this picture, and indeed everyone asks when they see most large trees for sale at nurseries anywhere in the world. 1. How old is it? 2. How much is it? The truth is, you'll never get a straight answer! Futoshi here would have no idea how old it is - he can guess but it's only a guess (my own guess, pretty vaguely, is 50+). Ask him how much it is and he does a very Japanese thing of avoiding the question. Prices in Japan depend very much on who you are, not what you're buying.

More insights into the mysteries of Japanese tree pruning are available in my book NIWAKI, Pruning, Training and Shaping Trees the Japanese Way. A right riveting read.