In a list of big excitements that have befallen me of late (starting with the birth of our boy Digby more than two years ago now, then moving into our new home after more than a year and a half of planning and builder hassle, and finally Arsenal coming from behind to beat Barcelona 2-1 at the Emirates - it’s a pretty comprehensive list) spotting a tree might not seem that significant, but several times recently I have had a feeling, incomparable to any of the other milestones in my life, worthy of sharing: spotting a previously unnoticed Phillyrea latifolia.

This might need some explanation, although to those in the know it should go without saying: the Phillyrea is a small evergreen tree, harking from mediterranean climes. It’s related vaguely to the olive (the ea bit at the end of Olea, and Phillyrea I suppose) and bears the common name of green olive. It is hardy, looks a little bit like a small holm oak, and for some inexplicable reason, incredibly unusual (hence the excitement.) Everyone (who counts) has their favorite: Hugh Johnson’s is on Trumpington Road south of Cambridge, for example, while Angus White at Architectural Plants, who virtually invented the tree in the first place and certainly coined the name green olive, no doubt has more than one. He insists his customers and potential phillyrea owners check out the big one just off the A24 at Washington, or the rather beaten up old one at the church in Chideock on the A35 (yes, that Chideock, where the locals cross back and forth over the pedestrian crossing to annoy the motorists, most of whom are slowing down to catch a glimpse of the amazing tree anyway...) Mine basically changes every time I see a new one - it’s currently one I unearthed in Stourpaine down in Dorset. If you want to adopt a favorite, I’ve heard that Beaulieu has one, and looking online, it’s a cracker.

What’s so special about them? They look like broccoli - generally a good thing if you’re a tree. Round, lumpy and green. All evergreens tend to develop a certain character that deciduous trees lack - perhaps it’s the benefits of bearing foliage throughout the year, being at the whim of the worst of the winter weather - and phillyrea do it better than most. Smaller, prettier and tidier than holm oaks. They look particularly good against the sandstone of west country Old Rectories - they’re that sort of tree, understated, sophisticated, old school. And they do something rather special when the sun shines, the rich green foliage reflecting the light like no other tree I know. Oh, and they prune particularly well. They used to be a popular choice for topiary, and are one of the very best for cloud pruning and Japanese-style niwaki. To recap then: nice sculptural shape, rich green foliage all year round (and it doesn’t go all sad at the end of the winter like some evergreens do) and, forgot to mention, great bark. Understand this: unexpectedly coming across a good phillyrea amidst all the  predictable mediocrity of so many other trees, has the same kind of effect as hearing a bit of Led Zeppelin on Radio 2.

What prompted me to write all this was a tree I’d never seen before, until it jumped out at me as I was driving through Sherborne the other day. Not like a man with a machete from behind a hedge, but almost. It was on a bank, which always helps - there’s something about banks and small trees that go well together - the sun was shining, and it looked radiant, almost divine. I’d driven along the road countless times before, but since my last journey some tree clearing had taken place, and the phillyrea stood newly exposed, framed by the house behind. Of course, drive-by glimpses can often give a false impression, the excitement exaggerated by the nature of the sighting - I think of all the times I’ve returned for a longer look, barely to recognise what it was that brought me back in the first place - but this time on my return, armed with a camera, all was as it should have been. The man with the machete was still there (although worryingly no one else seemed to notice him) the phillyrea was sublime (but I wish they’d cut the conifer next to it down) and there was even a place to park.

Here it is, the tree that caused so much excitement: And here is one near Gillingham that I kept seeing peeking over the top of a hedge. I went in recently and asked if I could have a proper look. Finally, a fantastic old one down in Beaminster - also in Dorset. 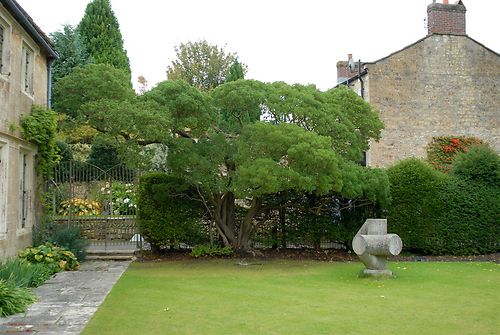